5-year-old Alex had always been a very happy, sweet and crazily active little boy… that was until he was no longer able to walk and now battling for his life. 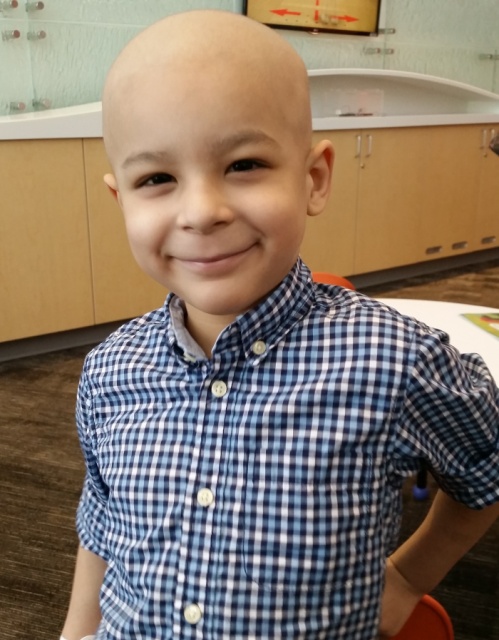 On March 26th of this year, Alex began complaining of pain in his legs. At first they thought it was due to him jumping off of his brother, Christian’s, bunk bed. They took him into orthopedics thinking he had an injury and found he was perfectly fine… at least that’s what the orthopedic said. They went home and called his pediatrician.

Two weeks later, Alex couldn’t even walk. His legs continuously got worse and bruises began to appear. His pediatrician told them to come back in and 3 days later, they were told that Alex had Acute Lymphoid Leukemia (Philadelphia positive). Due to a blood based fungal infection, he and his family had to stay in the hospital for 6 straight months. On top of this, just one month after Alex’s diagnosis, their home was burglarized and everything was stolen. All of their electronics (TVs, X-box, tablets, and more) along with the kids’ games; the only entertainment they had with Alex due to his limited physical abilities. 5 months later they were finally able to go home and have been in and out of the hospital since.

Since his diagnosis their lives have changed forever. Their sweet boy has had to undergo painful after painful procedure and it breaks their hearts as parents to see him cry and having to hold him so that he can get pokes and medicine. Alex is truly inspiring to them. Despite all he’s been through, he still always smiles and plays and loves people. They are very proud of him. Although they are still aware that anything can happen, they know the positive and the negative of cancer; even more so as he is considered a high-risk patient.

Alex is 8 months into treatment and has 4 ½ months until they know for sure what will happen and where they stand. The entire process is expected to take three years. Financially they are not at their best, but they never complain and thank God for what they do have.